Wurzburg, some time to explore on our own.

After our morning’s visit to the magnificent Wurzburg Residence and a rather informative info-walk delivered by our knowledgeable tour guides, we chose to fill the rest of the day exploring on our own.

The Kapelle Pilgrim Church across the Main River.

Wurzburg (population approximately 140,000) is built on the banks of the the Main River. Its architectural style is quite different to that of the half-timbered or Fachwerk style of little Mitenberg township which we’d visited on the previous day.

Fortress Marienburg from across the Main River in Wurzburg

With a rather eccletic mix of Romanesque, Gothic, Boroque and Rococo styles along with some other rather modern architecture interspersed, we found it a small but most interesting modern day city.

According to Wikipedia, Wurzburg has experienced many changes. In earliest times (from about the 4th to the 7th century A.D.) it was called home by some of the Celtic race. Later there were the Franks. It was also visited by early Christian Irish Missionaries. But by about the 8th century, it had come under the rule of the Catholic Prince-Bishopry. Today, of course it is part of the Federal Republic of Germany. 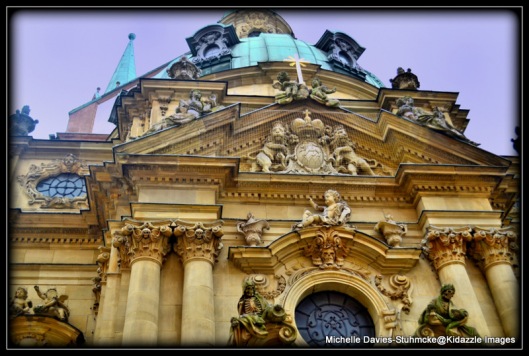 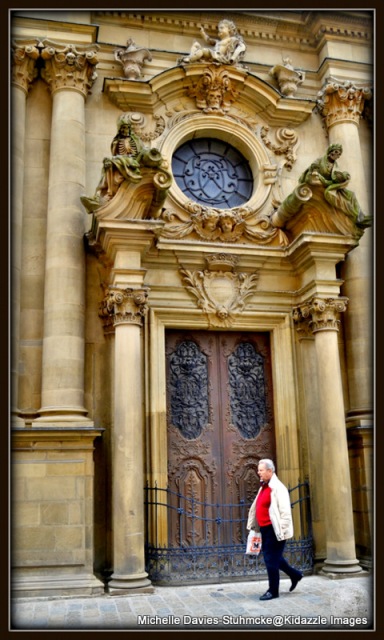 Skeleton detail over doorway to Dom St Kilian in Wurzburg 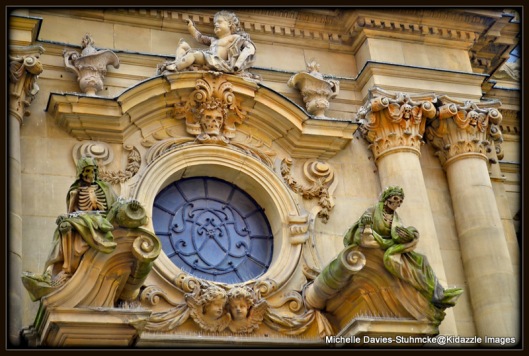 A closer look at the detail surrounding the doorway.

Along with several other German cities, Wurzburg has seen many religious, cultural and political upheavals. It is a veteran of the civil unrest associated with Napolean’s French Revolution and the Wars with the Hapsburgs. It has been witness to the cruel events related to the medieval Witch Trials. It has seen the atrocities that impacted its Jewish population during the German holocaust. Added to this, it was very extensively bombed by the British during World War 2.

Yet Wurzburg survives…..one could even say it flourishes.

Red and White roses in the Flower Shop in Wurzburg.

Today it is home to some 30,000 or so University students and it is famous for its Franconian Wine production. There are many beautiful vineyards throughout the region. We sailed past many of the grape growing areas as we travelled along the Main River. Even the Wurzburg wine bottles are famous. They are called a Bocksbeutel  and have their own very distinctive shape…… a rather short neck leading down to a flattened yet bulbous looking bottom. 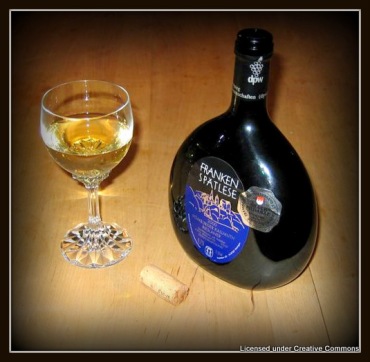 Dearly Beloved (D.B.) and I found it interesting just strolling the banks of the Main River. We enjoyed taking in the lovely views across to the Marienberg Fortress (built 13th century) and the Kapelle Pilgrim Church (built 18th century).

D.B. letting the jeweller know that one of the clocks on the building was showing the wrong time for Sydney Australia. It was still showing Daylight Saving time in May.

In the afternoon we made our way back into the cobbled stone centre of Wurzburg City and then spent a further couple of relaxing hours just exploring the more accessible sights of this lovely Franconian district.

Yes it was definitely a modern a modern city but it was also steeped in a long ……and at times traumatic history. 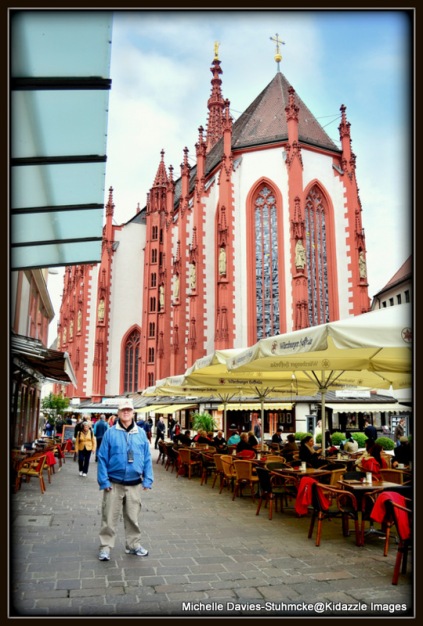 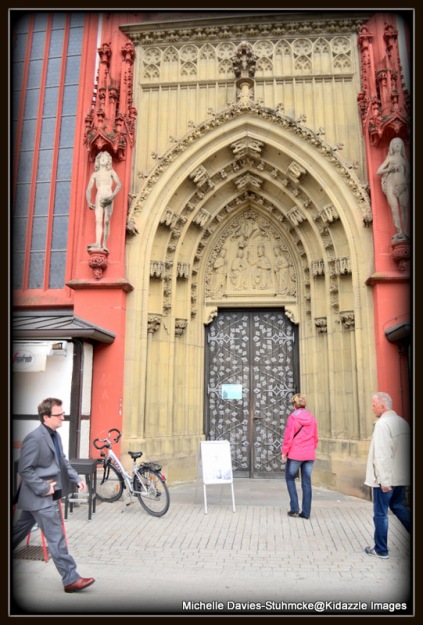 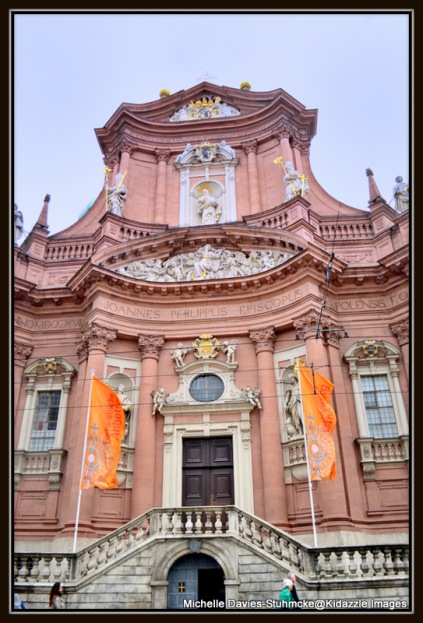 Loved this display in a shop window, Wurzburg.